The Wedding: A Family's Coming Out Story 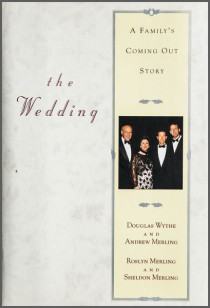 In 2000, Dr. Merling co-authored a book with his husband, Doug Wythe, and his parents, Roslyn and Sheldon Merling, titled THE WEDDING: A FAMILY’S COMING OUT STORY. This book chronicles the events that unfolded once Dr. Merling and his husband-to-be announced to his parents that they were planning a traditional wedding ceremony with all the bells and whistles.  Typical wedding conflicts over money and manners paled next to worries over whether Andrew’s parents would find themselves ostracized by the conservative community in which they lived.  They all had to face the previously unacknowledged prejudices and hidden concerns that suddenly reared their ugly heads when talking about the wedding with friends and family.

Two months before the wedding, they decided to perform the ultimate act of “coming out” when ABC-TV news asked to profile them in an hour-long show on same-sex marriage, bringing national attention to their personal struggle.  This “coming out”, and the wave of national support that followed after the show aired in the Fall of 1996, led them to share their story with others.

THE WEDDING: A FAMILY’S COMING OUT STORY blends the four distinct voices of Dr. Merling, his husband, and his parents to create a unique depiction of the painful, yet joyful odyssey of discovery they embarked on as they struggled to be heard and to find acceptance from each other, their friends and communities.

Here’s what people are saying about THE WEDDING:  A FAMILY’S COMING OUT STORY:

“This story is timely for now-and from now on.  I love the Merling and the Wythe-Merling families.  What extraordinary, beautiful people”

“Most families come to terms with a child’s homosexuality in private.  Lucky for us, this brave group has chosen to share its compelling and surprisingly intimate coming out journey in a very public way.  Luckier still, they’ve crafted an inspiring page-turner that should give us all hope for the future”

- Eric Marcus, author of Is It a Choice?, co-author of
Breaking the Surface (the Greg Louganis story)

“Told in chatty, rotating, first-person narrative chunks, this collaborative memoir recounts, with surprising candor, the events and emotions leading up to Andrew and Doug's wedding…..Straightforward and even-handed, this four-way confessional case study makes an interesting addition to the growing literature on gay marriage”.

“Honesty with very little sap, The Wedding offers a snapshot view of a family coming to terms with one another with courage and concern”.